How we engaged a reluctant community to reconsider vaccinations.

Prioritizing child health
As summer 2021 was ending, the state of Arkansas reported the third lowest COVID-19 vaccination rate in the country, with under 36% of residents having received both doses. With COVID-19 infections surging across the state, Arkansas Children’s started to see child infection rates greater than they’d seen at any point during the pandemic. Driven to deliver “unprecedented child health,” Arkansas Children’s knew it was time to get vocal about vaccinations and actively engage their communities. They looked to Core Health for support.

Understanding the target audience
When we began planning, Gallup said only 20% of people were somewhat or very open to reconsidering receiving the COVID-19 vaccine. These individuals were cautious about the vaccine, but would be more open to it if their needs and questions were to be addressed. That defined our target audience – the "moveable middle."

Our strategy centered around encouraging people to engage in conversations with their healthcare providers about vaccinations. For a more detailed exploration of our research and strategy, please visit this article.

The conversation around COVID-19 vaccinations had become increasingly polarizing due to misinformation, making it hard for people to know who to trust. Our research showed that piling on more facts would be unhelpful. We knew we wouldn’t reach people using fear or adding to the appeals that could turn them off from listening. As a result, we had to be mindful about how we would add yet another voice to the vaccination dialogue while making sure our messages stood out.

Craft messages with empathy.
Our focus with mass communications was to approach our audience with empathy, persuading people to talk with their providers about their questions. We crafted empathetic messaging to help our audience feel seen, heard, and safe. The risks of not being vaccinated would be highlighted in trusted one-on-one provider-patient communication.

Present the vaccine as a reasonable choice rather than a directive.
For the vaccine hesitant, communicating freedom of choice can be more appealing than messages that overtly state that they must get it. Perceived mandates can threaten individual values and worldview, and shut down consideration.

Provide reassurance from trusted sources.
For cautious vaccine adopters, receiving information from healthcare providers and, in particular, their own, can make a significant impact. We equipped providers at Arkansas Children’s with the tools to facilitate conversations with parents about COVID-19 and the vaccines.

And we drove everything with a unifying call-to-action that embodied these strategies.

We created an empathetic, non-threatening theme, aligning needs for both internal and external audiences, that:

We began with fundamental key messaging — organizing everything around our core strategies so our message was targeted and strategic in all communications. We worked with clinical experts at Arkansas Children’s to develop comprehensive, easy-to-read Frequently Asked Questions (FAQs) that would live on their website and guide all communications. 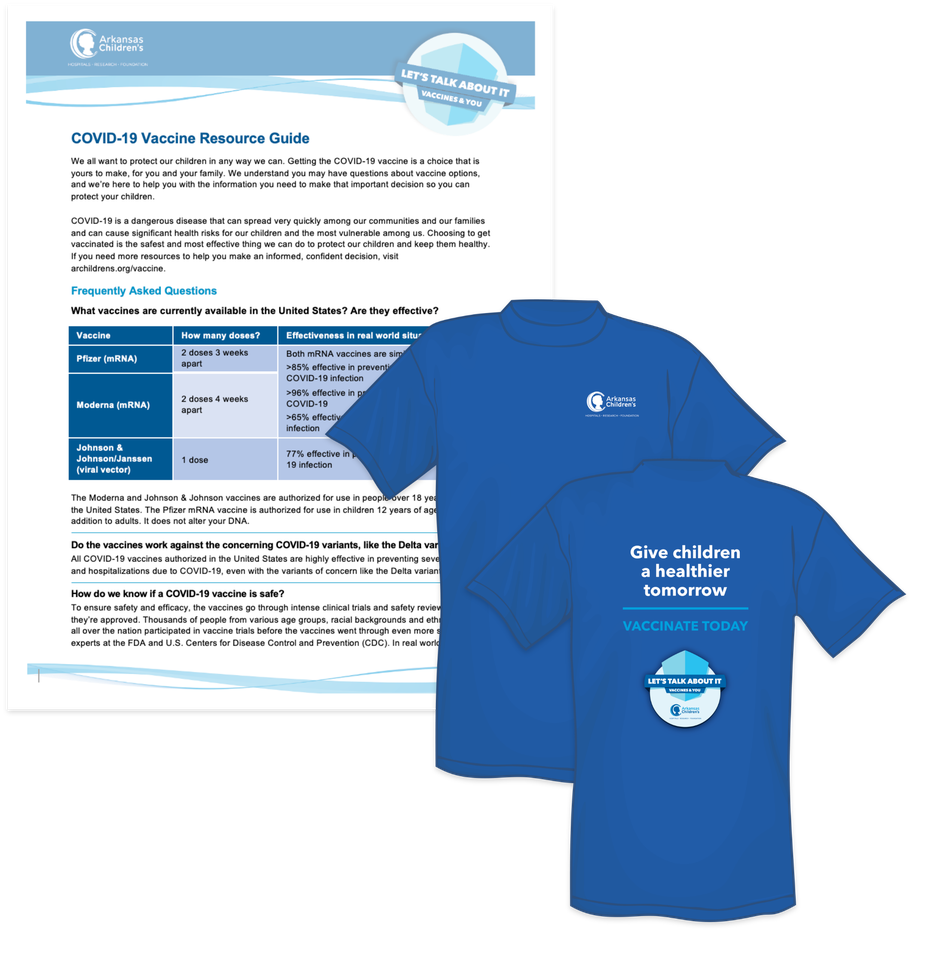 To equip providers to facilitate the conversations we were encouraging our audience to have with them, we created:

With local media partner arkansasonline.com and other digital networks, we continued serving empathetic and encouraging messages. Digital content was placed on targeted, contextually relevant websites and included native articles providing deeper explorations of parents’ concerns, like specifics around new variants and getting kids back to school safely.

Because the campaign invited conversation, we created prompts for social media that furthered the empathetic connection we sought to create with our audience. Content was designed to ask people about their questions and concerns, while always driving them back to the Arkansas Children's website for answers.

Digital billboards continued to drive awareness of the campaign, maintaining the empathetic conversation starter and encouraging people to visit the Arkansas Children’s website to get their questions answered. We placed one digital board in each of Arkansas Children’s key markets: Little Rock, Springdale, Jonesboro and Pine Bluff. The messaging provided a stark and strategic contrast to what people continued to hear elsewhere.

We took an educational approach to delivering our message like a public service announcement in broadcast media, which included Connected TV. We selected a well-known Arkansas Children’s pediatrician who was best poised to deliver our message – an invitation to speak with us – in a warm, empathetic way.

Our message was delivered and resonated

In September 2021, we launched the “Let’s Talk About It” campaign. Within the first month, digital billboards delivered over 3 million impressions in key markets. People engaged with our digital content at an above-average level, sparking a 300% increase in calls to Arkansas Children's and a 1,000% increase in Facebook audience size. It was clear people had questions and the data showed they knew they could come to Arkansas Children's to get them answered, safely, without pressure, because we all wanted the same thing – to protect our children in any way we can.

After November 21, 2021, when the FDA and CDC announced Emergency Use Authorization for 5- to 11-year old children, Arkansas Children's saw a massive spike in vaccine appointments. A clear indicator that some of the parent population was eagerly awaiting this approval and that Arkansas Children’s was top-of-mind as their preferred administrator for the vaccine for children.

In the initial flight of the “Let’s Talk About It” campaign, we generated more than 180 million impressions in approximately three months, serving our primary goal of generating awareness. Internally and externally, the campaign was embraced and celebrated. Statewide vaccination rates have increased by more than 18% since the campaign began — getting Arkansas closer to the national average.

Facing your own challenges?

We're ready to help you overcome your biggest healthcare marketing challenges — both internal and external — so you thrive in today's competitive market.